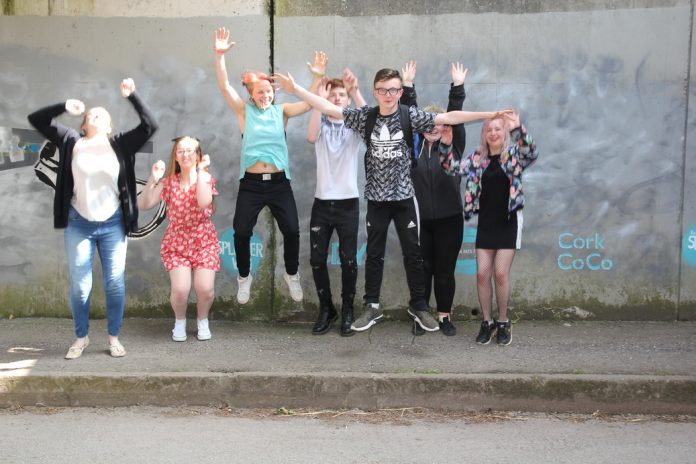 Midleton teens are transforming their community through art, one bridge at a time.
A team of teenagers from My Place Youth Drop In Centre have transformed the bridge underpass close to the entrance to Ballyanan woods off Dwyer’s road.
The project was spearheaded by Splattervan Mobile Arts Group in collaboration with Cloyne Youth Diocesan Service (CDYS) and partly funded by a Cork County Council Arts grant.
A group of 11 teenagers worked with Claire Coughlan and Helen O’Keeffe, both artists and facilitators, over a four-week mentoring period to discuss, plan, design and ultimately unveil the art work.
The adolescents enrolled in the Youth Mural Arts Programme drew on inspiration to create their artwork around the theme “Our voices spoke in secret until we found our space.”
The young students painted two massive zips on either side of the underpass, both of which reveal a secret world behind the wall.
The project formed part of the Midleton mid-May Arts Festival which was held between 11-13 May.
This year’s Festival focused on Art in hidden places.
Ross Bonner, CDYS Youth Officer said that, resulting from the programme the young adults discovered the power of art to give a voice to what needs to be expressed.
"Through art, the process gave them a chance to explore their identity, who they are, and not only how they see their world, but what they can do about it.
“It’s about the democratic process. It’s not all about one voice. They all had a different idea and this had to grow out of 11 ideas.”
The teenagers felt that their voices were not being heard, as they didn’t matter. However, through the 4 week Arts Programme and the space within CDYS they feel their voice will now be heard.
East Cork Municipality Chairwoman, Fine Gael Cllr Susan McCarthy , said projects like the Splattervan Programme is “something that improves public spaces as well as encouraging creativity, and that’s got to be commended.”

The Underdog Set to Take on the Boss in the Pepperstack’s...