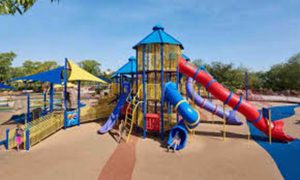 Cobh Playground Fundraising is holding two fundraising events, one in Cobh and the other further afield, this weekend as the group nears its fundraising goal.
The Springfield Reunion Match is the first to take place this weekend, kicking off at 3pm on Saturday, 2 September and will be followed by the rescheduled Carrauntoohil climb on Sunday, 3 August.
“The football match is on Saturday,” said Ruairí de Barra, Public Relations Officer for Cobh Playground Fundraising. “There will be a lot of good footballers there, and some not so good. It costs €10 per person which includes food. It is not supposed to be a huge fundraiser, but it will certainly be a fun one.”
The more serious fundraiser of the weekend will take place at the Macgillycuddy's Reeks in County Kerry, where approximately 40 people will climb Carrauntoohil, the highest peak in Ireland, to raise money for Cobh Playground Fundraising. The climb was originally scheduled for 19 August, but was postponed due to forecasts of inclement weather.
“The climb is Sunday,” said Mr de Barra. “We got a phenomenal response for it. We may have up to 40 people climbing on the day. Each of them raised a minimum of €100, with some really raising in excess of that. We are so pleased with the effort and we are hoping that it will take a large bite out of our remaining target.”
The current total stands at €162,587 and the group expect to enter the formal tendering process next month.
“Continue with our fundraising night up until they break ground,” said Mr de Barra. “Might be holding the Full Monty show with Cobh’s Own Bad Boys again this Christmas as it was so well received the last time around. We are proceeding with our application as a charitable body. Currently we are a non-profit organisation but we are planning for the future. When the playground is complete we will still need to maintain it and replace bits here and there, so we would want to hold fundraisers to help out Cork County Council with the costs. We want to keep the playground going in perpetuity.”
Cobh Playground Fundraising was established in July 2015 to supplant the under-equipped playgrounds at the Five Foot Way and the Promenade with an all-inclusive playground suitable for all children in the town, including those special needs or those who are differently-abled.

Twilight Walk in Aid of BUMBLEance Being Held at Fota Wildlife...