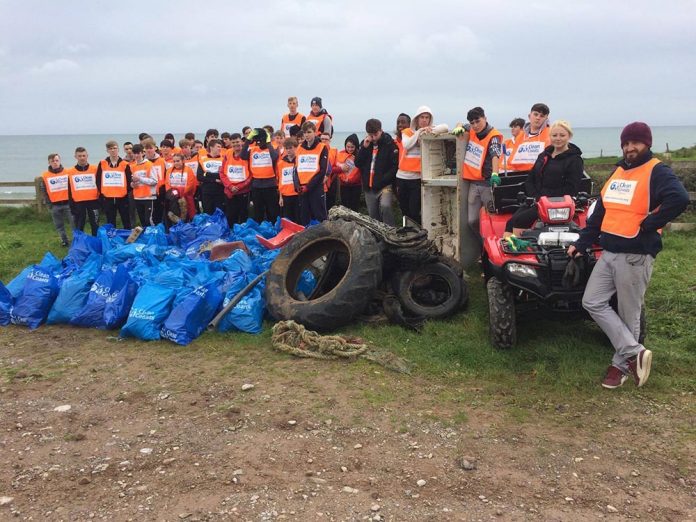 Almost 100 students from St Coleman’s Community College Midleton took part in a clean-up operation at two popular East Cork beaches.
The team of transition year students spent a number of days cleaning Ballybrannigan and Ballycroneen beaches under the direction of teacher and Clean Coasts member Proinsias O’Tuama.
Over 5 tonnes of rubbish was collected in total by the volunteers from a 1.2km stretch of beach, while learning the importance of protecting East Cork’s marine ecology.
The haul collected over two separate clean up days represents 254 bags of rubbish, a Chinese fridge and 114 tyres, representing more than 360 hours of labour. The equivalent of one man working 45 days straight for eight hours a day.
Last month the same 90 students cleared over three tonnes of rubbish from 600 meters of the same beach, among the 117 bags of waste recovered were 75 tyres and heavy industrial fishing nets.
Last week’s clean-up operation brought a further 2 tonnes of rubbish from the same beach bringing their entire haul to 5 Tonnes.
Their efforts on 18 September were applauded by minister for the Environment Denis Naughten.
Minister Naughten took to twitter to tweet “Well done @colmansmidleton on your efforts. I’m working to make sure tyres don’t pile up again.”
Earlier this month the Environment minister introduced a fund of over €1million to be used to eradicate stockpiles of tyres which are illegally dumped around the country, potentially causing toxic fire threats and damage to human health.
Mr O’Tuama welcomed the move he said “the Ministers initiative should go 99.9% of the way to resolving the situation.”
The fund is being administered through the local authority. Its estimated almost 800,000 tyres have been dumped throughout the country.
Minister Naughten said in addition to the fund a new compliance scheme is being introduced to ensure as many old tyres are removed from the system.
The scheme will be operated by Repak End Of Life Tyres with a registration and reporting role for the Producer Register Limited.

United In Youghal For Pieta House