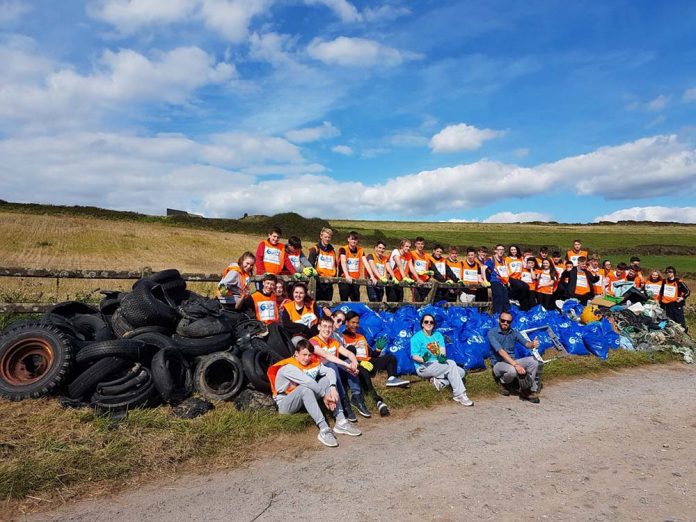 Two Transition year classes from St Colman’s Community College Midleton collected over three tonnes of rubbish from East Cork beaches on Monday 18 September.
Among the 117 bags of waste recovered were 75 tyres and heavy industrial fishing nets.
The 46 students were part of a national coastal clean-up effort to remove litter and debris from our coastal environment.
The nationwide Big Beach Clean-up is part of Ocean Conservancy International’s, coastal clean-up day.
In 2016 nearly 800,000 volunteers from 90 countries took part removing over 8,000 tonnes of marine litter from our oceans.
The St Colman Community College’s litter picking effort did not go unnoticed with Minister for the Environment Denis Naughton taking time to tweet “Well done @colmansmidleton on your efforts. I’m working to make sure tyres don’t pile up again.”
Last month the Government announced a fund of over €1million to be used to eradicate stockpiles of tyres which are illegally dumped around the country, potentially causing toxic fire threats and damage to human health.
The fund is being administered through the local authority. Its estimated almost 800,000 tyres have been dumped throughout the country.
Minister Naughten said in addition to the fund a new compliance scheme is being introduced to ensure as many old tyres are removed from the system.
The scheme will be operated by Repak End Of Life Tyres with a registration and reporting role for the Producer Register Limited.
The new scheme which starts on 1 October puts the responsibility for disposal of the old tyres on the retailer when new ones are purchased.
Registration of the new scheme will be mandatory for all premises placing tyres on the Irish market.
The new structures will be funded by a visible Environmental Management Cost (vEMC) of €2.80 per car tyre and €1.50 per motorcycle tyre. Further vEMCs will be introduced in due course for truck, construction and agricultural tyres.

“Fees for the collection and management of waste tyres are currently charged – I have evidence of them ranging between €1.50 and €3.50 - but the level of tyres being dumped around the country suggests that these fees do not always end up funding that for which they are intended i.e. the environmentally sound management of tyres. Setting this vEMC in regulation will formalise and standardise this existing charge that the consumer already pays when purchasing new tyres and will ensure that waste tyres are disposed of legally” commented Minister Naughten.

Two Senior Planners to be assigned to the Midleton Greenway Project

Cobh Playground Funding – Our Town, Our Children, Our Playground