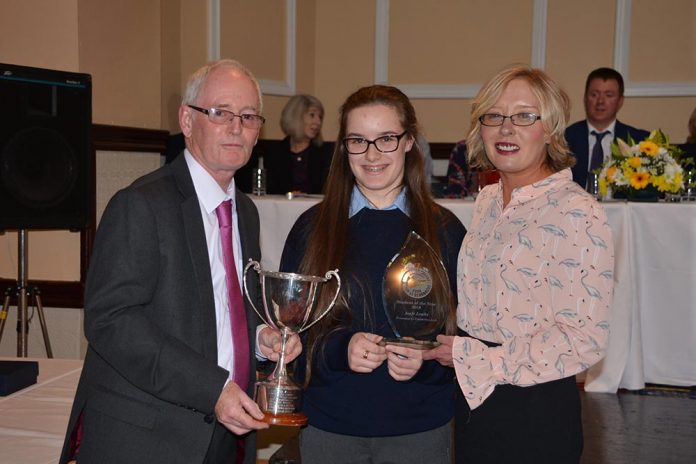 The academic year drew to a glittering close in Carrignafoy Community College with a spectacular end of year Student Award Celebration at The Commodore Hotel on Thursday 10 May. M.C. Ms Laurie O Driscoll extended a broad welcome to one and all, including parents, sponsors, award recipients and Bryan Crowley, guest speaker, who gave an inspirational address on the night. Bryan is a past pupil of the College and is responsible for policy making, planning and the expansion of ESB networks currently. Coincidentally, he was also recipient of the “Student of the Year” Award when he was a Leaving Certificate student at the college.
The night began with TY student Smilla Stumf violinist, entertaining guests as they arrived.
Each student’s photograph appeared on the screen as they received their awards. Danny Murphy from Murphy’s Centra Cobh presented the class awards, and the Subject Awards were presented by David Sheehan from Bank of Ireland and Mark Kennedy from Janssen Sciences. Whelan’s Stores kindly sponsored a host of sports awards and these were presented by Alan Whelan on the night. The “Excellent Attendance “awards were presented to 11 students by Eucharia Gould from the Board of Management, and these were sponsored by Butlers’ Buses.
Sr Emmanuel proudly presented the “Faith Friends” group with their awards, kindly sponsored by O Flynn Electrical. Guest speaker, Bryan Crowley, presented the Gaisce awards and the One Book One Community awards.
Jamie Moynihan (Ryng’s Drapers) was happy to join with Ms Mary Geary, TY Co-Ordinator,to congratulate Melanie Fortier on winning an award for her overall contribution to Transition Year this past year.
Sinead Delaney A.I.B. was delighted to present Eric Hurley with his Junior Certificate Achievement award, before Irene Dow from the Parents Association gave a fantastic address to outline the great work of the P.A. Frank Donovan, Principal, awarded Leonie Dauster with the Foreign Exchange Student of the Year for adding so much to the spirit of the school since she entered.
Elma Twomey presented Darragh Mc Carthy with the Deputy Principal’s award, and the recipient of the Principal’s award was Leaving Certificate student, Liam Butler. As the ceremony drew to a close Student of the Year 2018 was awarded to Aoife Leahy. Aoife has been a fantastic ambassador for the College and her proud family was delighted with her success.

Councillors Claim Many Home Owners in East Cork Are In a...

An Exhibition of Thirty Paintings by John Adams

SECAD Partnership Hosts Jobs Fair with over 75 Roles to Fill