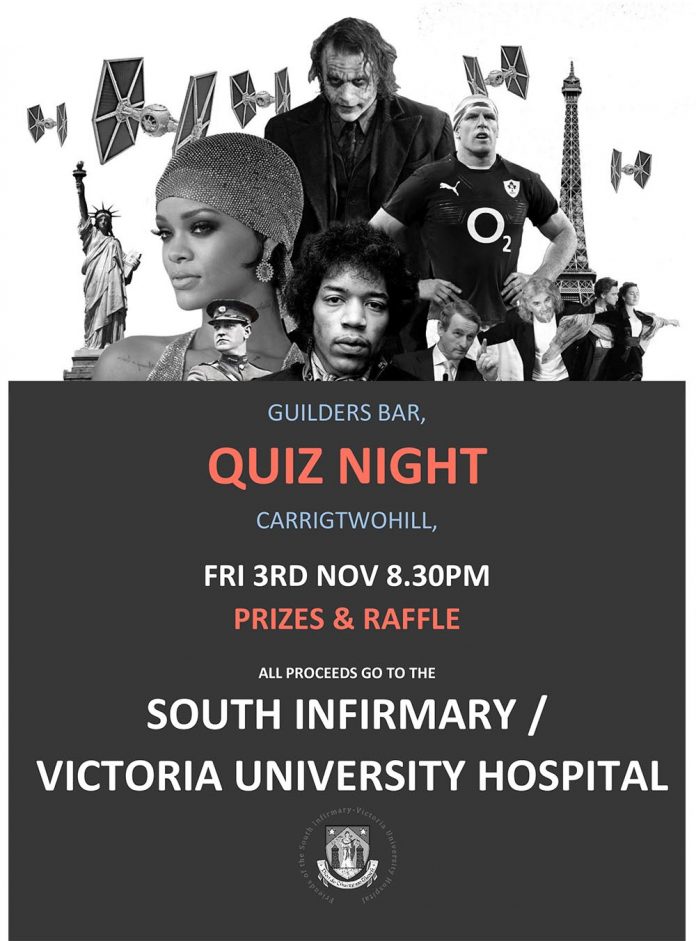 Carrigtwohill will host a table quiz fundraiser in aid of the South Infirmary-Victoria University Hospital next Friday, 3 November.
The quiz night fundraiser will be held at Guilders Bar on Main Street, Carrigtwohill and will begin at 8.30pm.
“Guilders Bar in Carrigtwohill will be holding the table quiz on Friday week from 8.30pm onwards,” said Denis Hurley, one of the organisers of the event. “The proceeds to the South Infirmary. It is €20 per table of four, so that is €5 per person as we don’t want to frighten anyone off.”
The proceeds raised on the night will go towards the South Infirmary-Victoria University Hospital, the third largest acute service provider in the Cork area.
“A lot of hospitals such as the Mercy [University Hospital, Cork] are very proactive in fundraising outside of the national budget, which never goes far enough,” said Mr Hurley. “The Friends of the South Infirmary and [Dr] John Bourke organise a load of events from carol singing to quizzes to golf tournaments and so on. We would like to thank Jim Cooney of Guilders for giving us the venue; he’s very decent. We’d also like to thank fellow members of the South Infirmary staff Juliette Wells and Gregg O’Brien for their help and support in organising the quiz.”
The table quiz will also include prizes for the first two placed teams as well as a raffle.
A number of Carrigtwohill businesses have indicated they will donate prizes for the raffle, such as Centra, Wefix, Cotters Pharmacy, Lynch Tile Centre, Rooster Grocery, Mary's Hair & Beauty Salon, Mannix Cabs, O'Briens Master Butchers, Turkish Barber, Top Drawer, Frank’s Chipper, Bloomsday Florist, Lakewood Furniture, Lynes & Lynes Auctions as well as buisnesses from slightly farther afield such as Leahys Open Farm and Garryvoe Hotel.
“Guilders have offered to put up prizes for the first two teams,” said Mr Hurley, “and we also wish to run a raffle. A lot of businesses in Carrig and beyond have agreed to donate prizes for the night. We will still be accepting donations for quiz up until the raffle opens. We are hoping the raffle will make the majority of the proceeds. But where donations are important there is no quiz without the actual teams, so we really need support on the night.”
To donate a prize for the raffle, or more simply to pledge a team to partake in the quiz, contact Mr Denis Hurley on 087 093 4141.