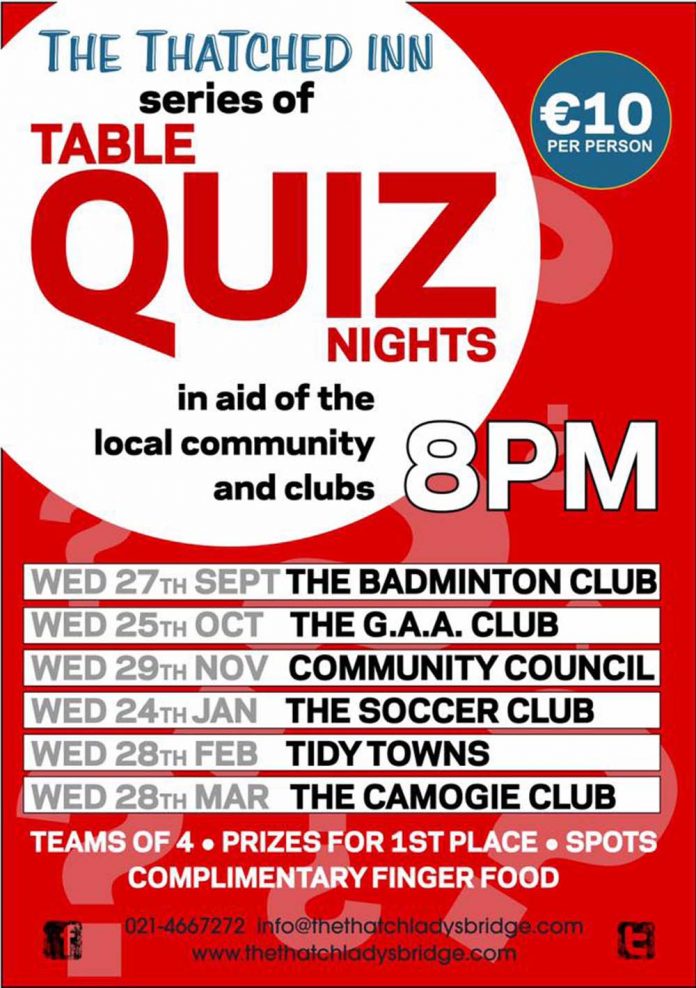 The Thatched Inn, Ladysbridge, is running a series of Table Quiz Nights in aid of the local community and clubs, with the next event being held on Wednesday, 25 October.
The series of table quizzes aim to benefit as many different local clubs, groups and initiatives as possible with at least one quiz set to be held each month through to next March. The first table quiz took place last night, Wednesday, 27 September, in aid of the local Badminton Club.
“The quizzes will be between teams of four with prizes for first place,” said Bryan Horgan, the organiser of the quiz series. “We will also have spot prizes and complimentary finger good. They are generally open to everyone with no pre-booking required. You can just show up on the night. We have gotten a good response so far. We are hoping to have 20-25 tables at [these quizzes].”
Donations or sponsorship of spot or raffle prizes for any quiz night would be greatly accepted.
The entry for the quizzes is set at €10 per person, with the proceeds going to the night’s chosen local club.
The currently confirmed quiz nights, which will all be held on Wednesdays, include one for the GAA Club on 25 October, the Community Council on 29 November, the soccer club on 24 January 2018, Tidy Towns on 28 February and the Camogie Club on 28 March.
“It is an idea I came up with and it is all about looking after the community,” said Mr Horgan. “We will be holding more of these events going forward as the response has been massive. We are a small community and we have to back each other. Anything made on the night goes to the clubs so the more money raised the better.”
The schedule for the series of quizzes is hoped to be continued after March next year, with more quiz nights to be announced.
“We’d like to keep every club happy,” said Mr Horgan. “I think I got all the clubs in the area, but if not this will be an ongoing event for the next two years. Table quizzes are fun nights out, especially from September on. What else would you be doing on a Wednesday night?”

A Ghostly Experience at Tyntes Castle in Youghal

LloydsPharmacy research finds that over a quarter of Irish adults worry...

Youghal4All to Host Barbecue on the Mall in Bid to Raise...