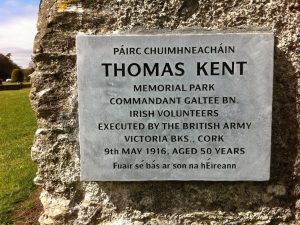 The "Thomas Kent Annual Commemoration " will be held on Saturday 17 June 2017 at 4pm in Thomas Kent Park, Rostellan.

* Local historical oration by Billy Fitzpatrick of Whitegate.
* MC, Mr. Charlie Hayes
* Music by Caitlín Ní Lordáin and Ceoltóirí Átha Fhada
* Wreaths will be placed to recognise the contribution of:

Thomas Kent
Thomas Kent was part of a prominent nationalist family who lived at Bawnard House, Castlelyons, County Cork. After the 1916 Easter Rising, Thomas was tried by court martial on the charge of armed rebellion, was sentenced to death and executed by firing squad in Cork on 9 May 1916. Apart from Roger Casement, Thomas Kent was the only person outside of Dublin to be executed for his role in the events surrounding Easter Week.
In accordance with the Kent family’s wishes, Thomas Kent's remains were removed by personnel from the National Monuments Service in June 2015 and lay in state in Collins Barracks on 17 September 2015. He was afforded a full state funeral which was held on 18 September 2015 at St Nicholas' Church in Castlelyons.

Denis Kelly
Denis Kelly was born in Ballyshane in 1845. He joined IRB as a very young man and became a ‘Centre’ in the Aghada/ Ballinrostig area. Following the Fenian uprising of 1867, Kelly escaped to the US. On his return, he became founding president of Aghada GAA in 1885, making ours one of the oldest clubs in Ireland.
Denis died in 1892, aged only 47. He must have been an extremely popular and charismatic character, judging by number and variety of nationalist-minded people from within and without the parish, who were involved in organising a specially commissioned Celtic cross to mark his grave. The monument is located in Aghada Old Graveyard and is engraved thus: ‘Erected by the Nationalists of Imokilly to the memory of Denis Kelly of Ballyshane who died 19th March 1892, aged 47 years’.

The Clonmult IRA Volunteers
The Flying Column of the 4th Battalion, 1st Cork Brigade were very active in the East Cork area during the War of Independence. On 21 February 1921 twelve members of this Flying Column were killed in a battle at Clonmult, near Dungourney. Two more volunteers were later executed. It was the largest loss suffered by the IRA during the conflict.

Local Irish Volunteers
84 people from the parish of Aghada were active during the War of Independence. They were formed under L Company, 4th Battalion, 1st Cork Brigade.

Recognition and thank you to the Rostellan Development Association for the development of the Kent Memorial Park during 2016 and for the continuing upkeep of the Rostellan area. In particular, the contribution of the late Mr. Paul Flanagan.

Lisgoold/Leamlara Community Council to Hold Fundraiser to Procure an AED for...

Type One Diabetes and Medical Card Should Have Access To New...