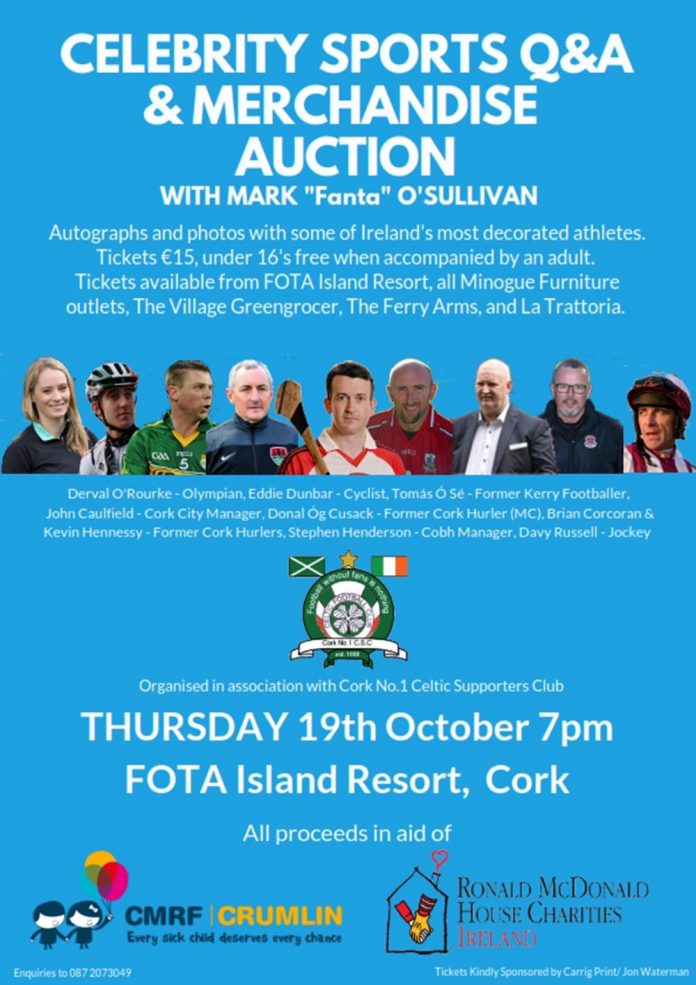 A Celebrity Sports Q and A with a Merchandise Auction following takes place tonight, Thursday, 19 October from 7pm.
Some tickets are still available for the Q and A with a sports merchandise auction will be hosted by Fota Island Resort, with proceeds going to both Ronald McDonald House Charities Ireland and Children's Medical & Research Foundation Crumlin.
“We have loads of celebrity sport stars coming for a Q and A for the kids above in Crumlin Hospital,” said Mark O’Sullivan, also known as Fanta, who will emcee the event. “We have Rob and Marian Heffernan coming, the managers of Cork City and Cobh Ramblers, Nicolas Roche, Donal Óg Cusack, Aidan O’Mahony and more. We have every possible sport covered including camogie, ladies football, athletics, equestrian sports and more. It is a great opportunity for kids to get their picture taken with these celebrities.”
The event will include autographs, photos and a questions and answers session with some of Ireland’s most decorated athletes. Said athletes will include: Olympian Derval O’Rourke, cyclist Eddie Dunbar, former Kerry footballer Tomás Ó Sé, Cork City FC manager John Caulfield, former Cork hurler Donal Óg Cusack, former Cork hurlers Brian Corcoran and Kevin Hennessy, Cobh Ramblers FC manager Stephen Henderson and jockey Davy Russell. Also included are Olympic race walker Robert Heffernan, former Munster and Ireland rugby player Thomas O’Leary, former Kerry football Aidan O’Mahony, and members of the Cork Camogie and Ladies Football teams.
“I’m delighted to be emceeing the event,” said Mr O’Sullivan, “especially the big auction. We have all sorts of sports merchandise from England and Ireland going for half-prices. We have football boots and jerseys from the Premiership, Ireland and Celtic, as well as from rugby amongst a host of other great merchandise. And again, all the proceeds are going to Crumlin in Dublin.”
Tickets for the Q and A with the Auction are available from the FOTA Island Resort, all Minogue Furniture outlets, the Village Greengrocer, the Ferry Arms and La Trattoria.