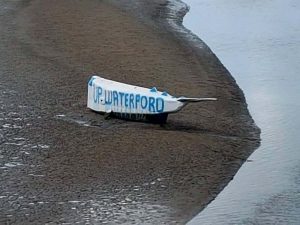 For GAA purposes Youghal in East Cork has become an enclave for Deise supporters where sections of the town follow their neighbouring county Waterford.
Fans of the blue and white are drumming up support ahead of this weekend’s hurling semi-final in Croke Park and Youghal’s Moby Dick is caught in the middle.
As local rivalries in the East Cork town heat up ahead of semi-final day, Youghal’s famous white whale has shown his true colours.
The town’s mascot can be seen sporting the Waterford colours, splitting an already divided town.
Last Saturday some local residents were in shock as they woke up to Moby supporting the motto “up the Deise”, emblazed in the county’s child of Mary blue.
The white whale who has long had a connection with Youghal has been beached on the Eastern side of the estuary to attract tourists to the heritage town.
Youghal 4 All commissioned the whale in 2013 to promote the areas connection with the 1956 film adaptation of the Herman Melville classic.
Helen Heaphy Grange from the Youghal group said “When I saw it first I was in shock but it’s a bit of banter, I just hope they’ll paint it white after the game.”
However, she said the joke was on the Waterford supporters as the prank has attracted increased interest in the town and gained almost 80,000 views on social media.
Let’s hope the Waterford supporters haven’t also harpooned their chances this coming Saturday

Grannies Enjoy Glamorous Afternoon in Youghal at Launch of Food and...