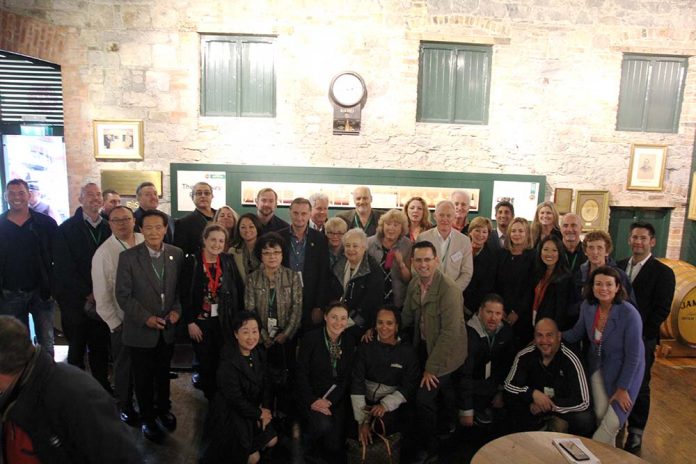 It may well be the case of Irish Eyes are smiling, as U.S companies that are most exposed to Britain’s departure from the EU, are now looking to Cork City and County to help Brexit-proof their business.
Last Wednesday 20 September, a delegation of U.S. firms visited Midleton, while on a scoping exercise of the County.
The 90 strong delegation from San Francisco, were welcomed by East Cork Municipality Chairwoman, Fine Gael Cllr. Susan McCarthy and brought on a tour of the Jameson Heritage Centre.
This was the second biggest visit including the group’s twinning arrangement with Cork City in 1984.
Norene Sheehy a board member of the ‘San Francisco Sister City Committee’ said as a result of their visit a number of memorandums of understanding have been signed with Cork firms.
Fine Gale Cllr Susan McCarthy says our superfast fibre-optic link with America and Norwegian Air’s, Atlantic flight route is helping to open up a runway to new markets.
The internet super highway, direct flights from Cork to Boston and the fact we are the only English speaking Country in Europe is making Cork an attractive alternative to the U.K.
“It’s a great opportunity for not just Cork City but the whole region to showcase our little part of the world as a serious contender when U.S. companies are looking to access the single market post Brexit. Cork has a lot to offer as a region and is an attractive alternative to the over developed Dublin region. We need to capitalise on the fact we will be the only English speaking EU state post Brexit, and maximise our opportunities in this regard.”
Denise Tormey a delegate member and a founder of Plannet21 communications, based in Little Island told the East Cork Journal at least two of the visiting companies have expressed a deep desire to relocate here as Brexit possess a real threat.
“One believes he may have to relocate because of compliance issues. The second is a company who is already here, who wants to set up Research and Development.” “Outside of this there are going to be both artistic and food exchanges” between Ireland and san Francisco.
€247 million was invested in Ireland in the first quarter of 2017. The flow of money is beginning to slow.
For many start up’s the immediate future presents a major problem. As part of the delegation Enterprise Ireland brought a number of venture capitalists to listen to 20 Irish firms in order to pitch their wares.
“While there was no investment expectations what many gained was huge insightful knowledge, huge connections” Ms Tormey tells the East Cork Journal
The Plannet21 founder is quick to point out, it’s not all about “an beal bocht.”
While we attract firms like Eventbrite, Amazon and Apple, Irish firms like Voxpro, Stryker and Plannet21 are making strong waves across the pond.

Breaking the Silence Cobh shortlisted for the Lord Mayor award

70 East Cork Estates Could Benefit From A Radical Speed Limit...

Cobh Summer in Full Swing with Funds Going to O.N.E and...