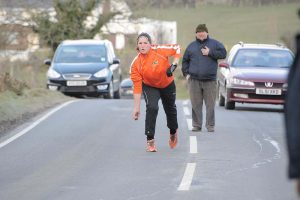 A European road bowling championship held in East Cork for almost 40 years hangs in the balance.
The king and Queen of the roads, held in Ballincurrig village since the 1980’s, may not go ahead this year.
Independent Councillor Noel Collins, told Cork County Council this week, that Bol Chumann Na hEireann’s Insurance Company may withdraw their cover for the event due to the condition of roads in the area.
“Parts of the course are in very poor condition particularly the stretch of road 300 metres from the old Ballincurrig creamery towards Rathcormac” commented Cllr Collins.
Cllr Michael Hegarty an avid bowler himself, backed the call. He said the loss of the event would be a major body blow to the local community.
The R626 in Ballincurrig village where the competition is hosted is seen as a challenging course for many bowlers, with decent straight sections so bowlers can demonstrate their skill coupled with different turns and cambers to add to its difficulty.
The event has drawn thousands of spectators including large numbers of fans from spectating countries U.K., U.S. and all parts of Ireland, for nearly 4 decades.
The sporting occasion has an annual economic impact of almost quarter of a million
to the local economy.
The Fine Gael Cllr told the authority’s director of roads, works had been carried out in 2016 in Ballincurrig village. However one mile outside the village towards Rathcormac, some repair work was urgently required, ahead of the championship on the 13 October.
The director of roads said he would “make sure the course is in its best condition between now and the 13 October.”