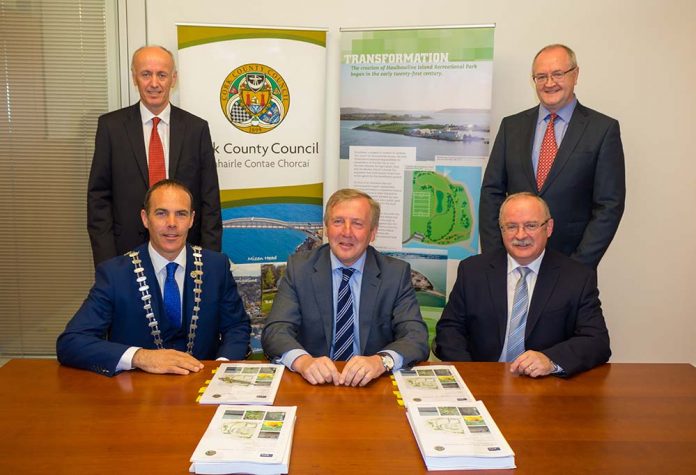 Transforming the East Tip of Haulbowline into a public recreational amenity is one step closer after the signing of an €8million contract for final remediation works.
Cork County Council have said the awarding of the contract to PJ Hegarty and sons was a milestone in the redevelopment of the site.
The transformation of the 22acre site is expected to take 18 months.
Deputy Chief Executive of Cork County Council Declan Daly said “the project has been many years in the making and the result of a tremendous amount of work. The redevelopment will be an enormous benefit to local communities and will join the ever-increasing number of amenities within Cork harbour.”
The new amenity will include a car park, playing pitch, walking / jogging circuit, picnic areas and viewing points.
The site estimated to hold up to 500,000 tonnes of slag a by-product of the steel manufacturing process, is believed to contain carcinogen chromium 6 and other heavy metals.
In 2011 the Department of Agriculture appointed Cork County Council to oversee regularisation of the East Tip after the EU threatened heavy penalties, if the site was not secured and made safe.
Some of the waste was taken off site and processed in Germany. It’s understood no further waste is to be removed and the site is to be capped with a semi permeable layer.
Independent Cllr Kieran McCarthy has expressed a lack of confidence in the clean-up operation.
He said by just dealing with the East Tip Haulbowline will still continue to pose a health risk to harbour communities.
“Everything we hear in the media is the East Tip but I have former contractors telling me the southern part of the island needs attention.”
“I have my concerns that we may be coming back to this in another number of years. We need to deal with it now once and for all.”
Independent Cllr Marcia Dalton concurred with Cllr McCarthy’s concerns, but remained optimistic that this would be “the first step of erasing the tragic legacy of Irish Steel in Cork Harbour.”
Labour Cllr Cathal Rasmussen a former employee at the Steel works said he was “delighted the contract was signed and that work on removing the eyesore from Cobh will commence.”
He said he was looking forward to the new amenity being available for all and that it will enhance the harbour back to the way it should be.