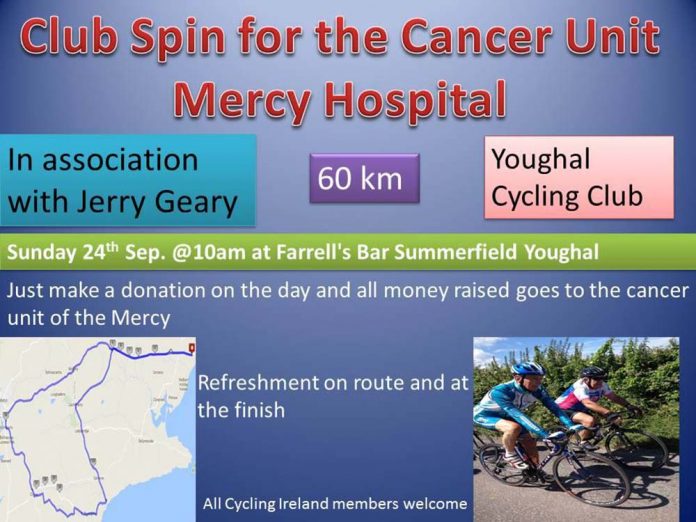 Cancer is nothing to smile about, but one Youghal man with non-Hodgkin Lymphoma, is looking to help other cancer patients.
Gerry Geary in association with Youghal Cycle Club is aiming to raise funds for a Cork cancer unit later this month.
Mr Geary said he was motivated to help the Mercy Hospital Cancer unit as he has witnessed first-hand the work being carried out by the staff and cancer research unit daily.
Gerry who is battling cancer for the past six years is still undergoing treatment for the condition and now wants to give back to other patients.
It’s this positive attitude that has kept him going for the past number of years, with Gerry keen to point out cancer isn’t a death sentence “I’m still hanging in their” “The nurses have brought me back at least three times already” he tells the East Cork journal.
On Sunday 24 September a team of cyclists are set to race across East Cork to aid the Mercy Hospital Cancer Unit
The leisure cycle will cover 60km of East Cork roads starting a Farrell’s bar Summerfield Youghal at 10am.
The route which is open to other cycle groups and members of cycling Ireland will take riders through Killeagh, Castlemartyr, Ladysbridge, Garryvoe, Shanagarry, Cloyne, Ballinacurra, Midleton and back to Youghal via 2 Mile Inn, Mogeely and Killeagh.
Entry into the event is by donation.
“It’s just one person, one club doing our bit.” “Every penny we make will go back to the Mercy Foundation, everybody is giving their time for free” commented Mr Geary.
While Gerry an avid cyclist is unable to partake in this event, he hopes to be back in the saddle soon.

East Cork’s Got Talent Finals Take Place this Saturday, with €900...